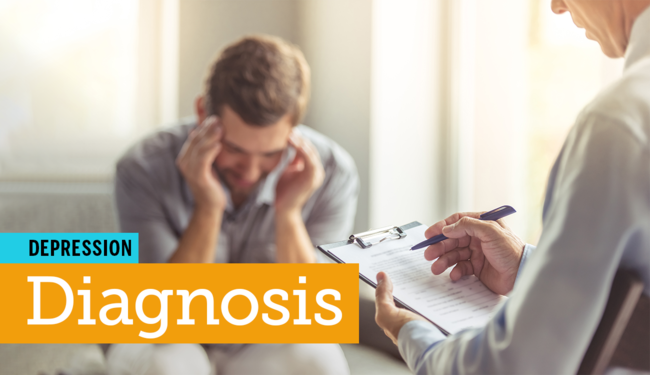 Once someone receives evaluation, depression is easy to diagnose. Depression symptoms may be overlooked early on if they are mild. Depression can be dismissed or mistaken for the effects of stress or fatigue. Many people wait until depression symptoms are severe before they seek evaluation and treatment. According to one study, only 1 in 5 people with depression seeks care. In many cultures and communities, there is a stigma surrounding depression and other mental illnesses that discourages people from getting diagnosed and treated.

Most people are diagnosed with depression by their primary care physician. Your general practitioner may continue to treat your depression, or they may refer you to a psychiatrist or a psychotherapist. “Psychotherapist” is a catchall term for someone who is certified in helping people with mental health issues. Depending on their training, a psychotherapist might be a psychiatrist, social worker, marriage and family therapist (MFT), or psychologist. Psychiatrists hold medical degrees that allow them to prescribe antidepressants and other medications; psychologists, MFTs, and social workers cannot prescribe.

Diagnosis of depression and other mood disorders is based on criteria published in the "Diagnostic and Statistical Manual of Mental Disorders" (DSM) by the American Psychiatric Association. The current edition is the fifth, known as the DSM-5.

How Is Depression Diagnosed?

To diagnose someone with depression, a doctor will look for the following symptoms:

Be as honest and open as you can with your doctor when reporting symptoms. Most people will not experience all of these symptoms, but if someone has low mood and several of the listed symptoms that have lasted for more than two weeks, a doctor will likely diagnose depression.

There are no laboratory tests that can diagnose depression, but blood or urine tests may be ordered to rule out medical conditions with overlapping symptoms.

Some subtypes of depression are diagnosed in slightly different ways.

Seasonal affective disorder (SAD) takes longer to diagnose than clinical depression because diagnosis requires that a person has experienced symptoms during the same season (winter or summer) for at least two years.

Postpartum depression (PD), also known as postnatal depression, occurs after childbirth. A doctor will ask about thoughts and feelings in order to determine whether the cause is “baby blues”—which lasts one or two weeks—or a more severe form of depression. Blood and urine tests may be ordered to check for underactive thyroid or other potential causes before the diagnosis of postpartum depression is given.

Learn more about the types of depression.

Kelly Crumrin is a senior editor at MyHealthTeams and leads the creation of content that educates and empowers people with chronic illnesses. Learn more about her here.
hug (34) like (75) comment (50)
sign up to view previous comments 1 of 50

Amen! Self pleasure is amazing. It taught me how to enjoy myself when others fail at doing so lol 😀😀😁

Depression - The Path to Diagnosis

If you’re living with depression, you may be wondering whether vitamin D can affect your mental...

If you’re living with depression, you may be wondering whether vitamin D can affect your mental...
read article >

To determine how you can reduce your medical expenses, MyDepressionTeam sat down with Susan Null...

To determine how you can reduce your medical expenses, MyDepressionTeam sat down with Susan Null...
read article >

Living with depression can come with a variety of symptoms, and sometimes that includes...

Living with depression can come with a variety of symptoms, and sometimes that includes...
read article >

Naomi Osaka is among the most recent celebrities to publicly discuss a diagnosis of depression....

Naomi Osaka is among the most recent celebrities to publicly discuss a diagnosis of depression....
read article >

No matter how severe depression can be, treatment is available. The two most common types of...

No matter how severe depression can be, treatment is available. The two most common types of...
read article >