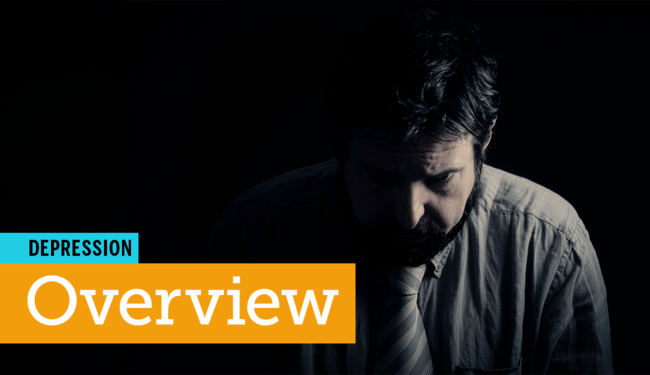 Depression is a persistent low mood that affects everyday actions and behaviors. While most people experience periods of sadness, grief, or general low energy, people with depression experience periods of weeks or months of hopelessness, sadness, and disinterest. Depression is a serious mental illness and is not a sign of weakness or a mood someone can simply “snap out of.” While depression requires proper treatment and support, it is treatable, and most people with depression will improve and return to full health.

Depression refers to a group of disorders characterized by at least two weeks of depressed mood and a variety of severe symptoms that make daily activities, including sleeping, eating, and working, difficult or impossible. People with depression also often experience anxiety.

There are a variety of causes of depression. While researchers have established that both hereditary and environmental factors can influence a person’s risk for depression, for the most part, they don’t know why some people suffer from depression and some do not.

Before the 20th century, depression was alternately viewed as a spiritual or a physical disorder in different cultures and eras. Depressive symptoms have been described for many millennia. In ancient Mesopotamian texts, mental illness was thought to be caused by spiritual problems or demonic possession, and priests treated it with exorcisms. Early Roman and Greek physicians believed that the human body contained four fluids called humors: yellow bile, black bile, blood, and phlegm. They believed that all illness was caused by an imbalance of the humors. Ancient Greeks called depression melancholia and defined it as a causeless sadness caused by an excess of black bile. Their cures for depression included diet, baths, and a mixture of donkey milk and poppy extract.

In the late 800s, the Persian physician Rhazes wrote that the brain was responsible for melancholia and mental illness. He suggested an early form of behavior therapy — positive rewards for appropriate behavior — as well as hydrotherapy (baths) to treat depression. Outside of Persia, however, depression was viewed as a spiritual affliction throughout the Middle Ages. Religious beliefs led many communities to fear people with depression. Some people with depression and other mental illnesses were subjected to exorcism, burned, or drowned.

During the Renaissance, “lunatic asylums” were home to many people with depression. In 1621, Robert Burton published "Anatomy of Melancholy," which described physical and social causes of depression such as fear, poverty, and loneliness. He recommended some of the same treatments as the ancient doctors — diet, exercise, and bloodletting — as well as some new ones, such as distraction, travel, music therapy, and marriage. Asylum populations grew in the 1700s when depression came to be seen as inherited. Depression was considered an “unchangeable weakness of temperament,” and people with depression were shunned by society.

In the late 18th and early 19th century, doctors and scientists began studying the anatomy, seeking a physical cause for mental illness in the brain and nervous system. The term “depression” slowly replaced “melancholia.” However, treatments continued to lack scientific evidence of effectiveness. Doctors attempted to treat people who had mental illness with water immersion (keeping a person underwater as long as possible), spinning stools (thought to rearrange the brain into its proper position), and electroshock therapy, pioneered by Benjamin Franklin.

In the late 19th century, psychoanalysts such as Sigmund Freud popularized the idea that depression was the result of real or symbolic loss. Freud and other psychoanalysts promoted talk therapy as a treatment for depression. However, medical treatment around the turn of the 20th century was rarely effective. Lobotomies — the surgical destruction of the front portion of the brain — were rarely successful and often led to severe personality changes, coma, or even death.

By the middle of the 20th century, physicians created a classification system that divided depression into subtypes based on the supposed cause. It was thought that some people with depression developed physical symptoms or even attempted suicide as a way to coerce support from their friends and family. These distinctions were abandoned in the 1970s, and by the time the third volume of the Diagnostic and Statistical Manual of Mental Disorders (DSM-III) was published in 1980, depression was described only by symptoms, not causes.

The first modern depression treatment was identified in 1951, when doctors treating tuberculosis with the drug Iproniazid observed their patients’ moods dramatically improved. Three years later, doctors using a different drug to treat blood pressure found their patients were lethargic and depressed, even suicidal. These observations in combination with emerging neurology research helped scientists understand that the brain requires certain levels of neurotransmitters – chemicals necessary for communication between nerve cells – to function in a healthy way. This led to the Monoamine Hypothesis, a theory that depression in some people is caused by low levels of a neurotransmitter.

Based on this theory, researchers developed monoamine oxidase inhibitors (MAOIs), the first class of antidepressant drugs, in the 1950s. MAOIs were followed in the decades to come by new classes of antidepressants, each with a different mode of action for adjusting levels of neurotransmitters. The groundwork of talk therapy laid by Freud and his contemporaries has grown to include many different forms of psychotherapy. Today there are more treatments for depression than ever before.

How Common Is Depression?

About 7 percent of the U.S. population will experience depression each year, and approximately one in six people will have a depressive episode at some point in their life. Women are twice as likely to have depression than men. Depression can begin at any age, but the median age of onset is 32 years. Over 10 percent of new parents, mostly new mothers, experience postpartum depression. Bipolar disorder is a rarer type of depression — about 1 in 100 people develop the condition.

Read more about the types of depression.

How Is Depression Diagnosed?

Most people are diagnosed with depression by their primary care physician, who will look for a variety of symptoms and inquire about their duration. Early on, depression symptoms may be mild and can be overlooked as stress or fatigue. There are no tests to diagnose depression, but blood or urine tests may be ordered so as to rule out conditions with overlapping symptoms.

Learn more about how depression is diagnosed.

While everyone will be affected in different ways, common depression symptoms include:

How Is Depression Treated?

No matter how severe depression becomes, treatment is available. The two most common types of treatment, psychotherapy (talk therapy) and medications, may be used on their own or in combination. There are many different classes of medications and many different types of psychotherapy used to treat depression. There is no single treatment path that will work for everyone. There may be a period of trial and error before the best treatment option is found.

What Is the Prognosis for Depression?

While there are many effective treatments for depression, long-lasting depression, especially if it goes untreated, can lead to self-harm and suicide. People with depression are four times as likely to have a heart attack as people who are not depressed. After a heart attack, depressed people are at a significant risk for death from a second heart attack. Depression is a common secondary condition of people with cancer or chronic illnesses such as multiple sclerosis, lupus, fibromyalgia, chronic pain, or heart disease. Approximately 30 percent of people who abuse drugs or alcohol also have depression; some may be self-medicating their preexisting depression, while in others, the substance itself causes the depression.

Kelly Crumrin is a senior editor at MyHealthTeams and leads the creation of content that educates and empowers people with chronic illnesses. Learn more about her here.
hug (33) like (52) comment (46)
sign up to view previous comments 1 of 46

Maria grago , I certainly know what that feels like . I’ve been there so often . Are you on meds or in therapy ? Both can b helpful . Cathy

Depression - The Path to Diagnosis

If you’re living with depression, you may be wondering whether vitamin D can affect your mental...

If you’re living with depression, you may be wondering whether vitamin D can affect your mental...
read article >

To determine how you can reduce your medical expenses, MyDepressionTeam sat down with Susan Null...

To determine how you can reduce your medical expenses, MyDepressionTeam sat down with Susan Null...
read article >

Living with depression can come with a variety of symptoms, and sometimes that includes...

Living with depression can come with a variety of symptoms, and sometimes that includes...
read article >

Naomi Osaka is among the most recent celebrities to publicly discuss a diagnosis of depression....

Naomi Osaka is among the most recent celebrities to publicly discuss a diagnosis of depression....
read article >

No matter how severe depression can be, treatment is available. The two most common types of...

No matter how severe depression can be, treatment is available. The two most common types of...
read article >

Once someone receives evaluation, depression is easy to diagnose. Depression symptoms may be...

Once someone receives evaluation, depression is easy to diagnose. Depression symptoms may be...
read article >